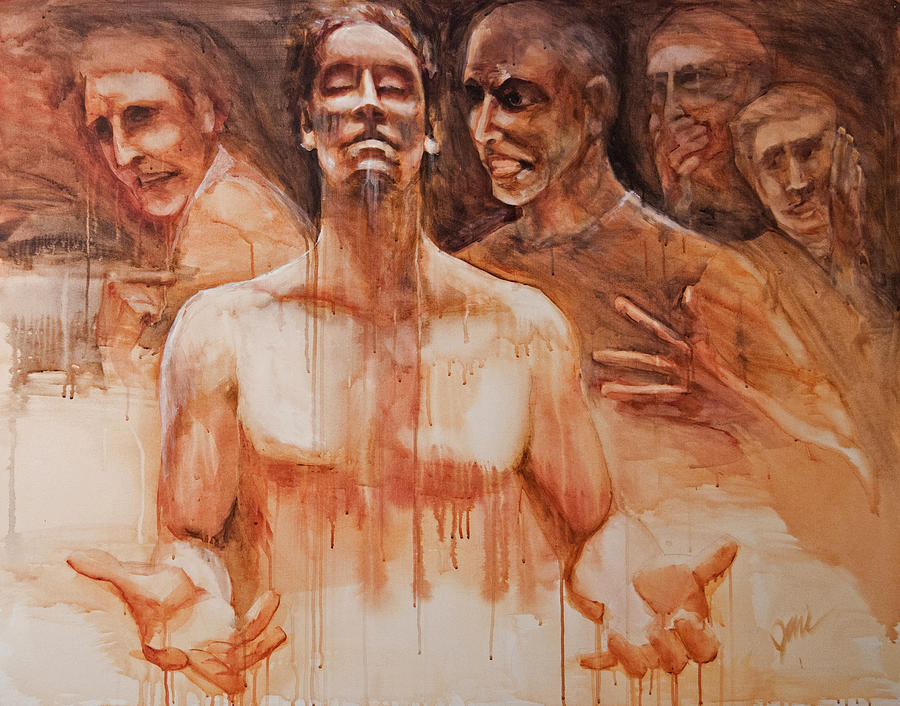 This original painting is currently for sale.   At the present time, originals are not offered for sale through the Jani Freimann - Website secure checkout system.   Please contact the artist directly to inquire about purchasing this original.

Personifying persecution in the form of gossip, mocking, anger and skepticism.

The idea for this painting came to me immediately. However, it was several months before the idea was put on paper. I wanted to personify the type of persecution that we see here in the United States.

The original intent for this painting was to depict religious discrimination. Mainly towards Christians; which is getting worse in American society.

Matthew 5:10 & 11 ~ Blessed are those who are persecuted because of righteousness for theirs is the kingdom of heaven. Blessed are you when people insult you, persecute you, and falsely say all kinds of evil against you because of me (Jesus).

Any type of persecution or discrimination on any level is wrong and hurtful.

Judge not lest you be judged.
Brothers, do not complain about one another, so that you will not be judged - James 5:9

I've had people tell me that they thought the man in front was Jesus. One of the cool things about this painting is that this can also be a depiction of Jesus being mocked and persecuted before he was put on the cross. He bore the pain of intense persecution; being mocked, spat on, punched, getting his beard pulled out, and his skin torn to pieces with a cat-o-nine tails whip and he endured it all for our sake.
What this image does not depict is the affect of the whip on his flesh. When they were done whipping him, he did not look human because of damage the whip had done.
The cat-o'-nine tails was fixed with sharp pieces of bone and/or metal. Each time it struck his body the nine tails tore at his flesh and caused profuse bleeding.
The Jewish law at that time was held to tightly; to not whip a man more than 40 lashes or scourging because nobody could endure more than 40 and would die. It was considered merciful to only whip a man 39 times.
Jesus recieved 39 lashes. 39 lashes from a nine-tailed whip fixed with knives.
Afterwards, the mocking continued. He claimed to be the king of kings so the Roman soldiers slap a scarlet - colored robe on his back and crowned him with a crown made of a thorny vine. The very sharp thorns were 2 inches long and when the crown was pressed onto his head, the downward-facing thorns were driven into his scull.
He then carried his own cross on his freshly beaten back.
Before nailing him to the cross, they tore off the robe; which was surely glued to his scorged back, re-opening and intensifying the wounds that had likely started coagulating.

Christ literally shed his blood for us.

That is true love in its purest form.

God loves us so much that He gave His one and only son so that whosoever believes in him may have eternal life - John 3:16