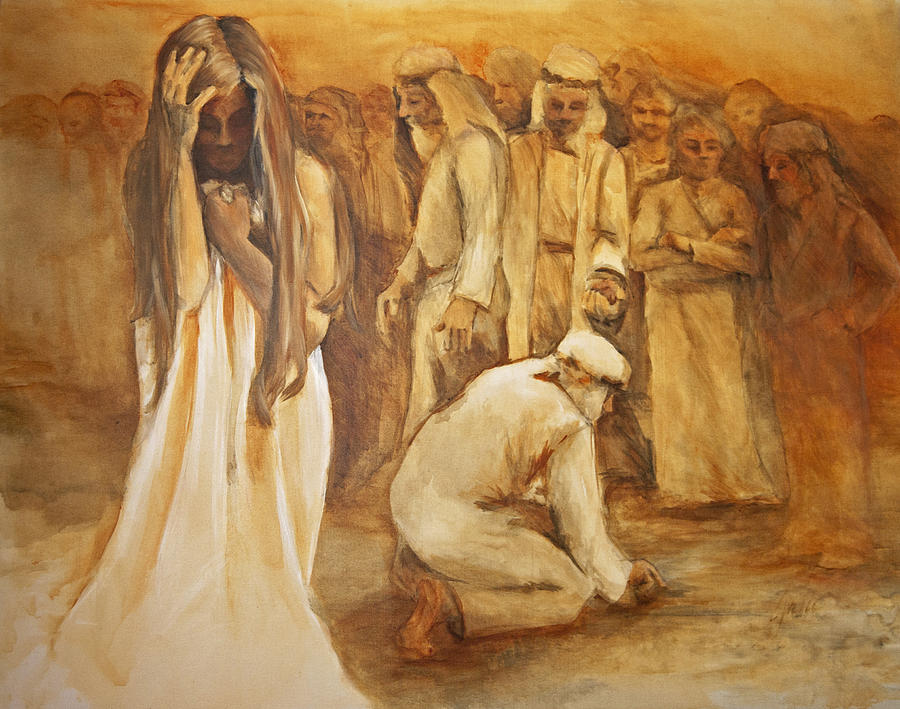 This original painting is currently for sale.   At the present time, originals are not offered for sale through the Jani Freimann - Website secure checkout system.   Please contact the artist directly to inquire about purchasing this original.

Illustration of Jesus writing in the sand.
The girl stands unaware of the mercy she is about to receive. Her sin fully exposed. Caught in the act of adultery. According to Jewish law, the law of Moses, anyone caught in the act of adultery was to be stoned to death.
John 8:1-11.
The pharasees used this girl to trap Jesus. Would he uphold the law? Jesus turned the situation into a story of mercy.
This painting illustrates how Jesus got their attention by being a peacemaker. He courageously knelt down not once, but two times to write in the sand in front of a crowd of people who would be all to willing to carry out justice. Some think he was gathering his thoughts, but consider the situation and the end result. I believe he was writing their sins into the sand.
When he said, "He who is without sin cast the first stone", the crowd dropped their stones and dispersed. The oldest ones first.

Jesus is placed in a vulnerable position between the girl and the angry crowd. The girl's uncovered hair, in a time when woman covered their hair in public, symbolizes her exposure. Her body is wrapped in a white sheet representing both the shame she feels and her wrapping herself in the cleansing forgiveness she is about to receive.

Jesus straightened up and asked her, "Woman, where are they? Has no one condemned you?"

"Then neither do I condemn you," Jesus declared. "Go now and leave your life of sin."

He never said that she did not sin, but told her to go live in the forgiveness that she received that day.